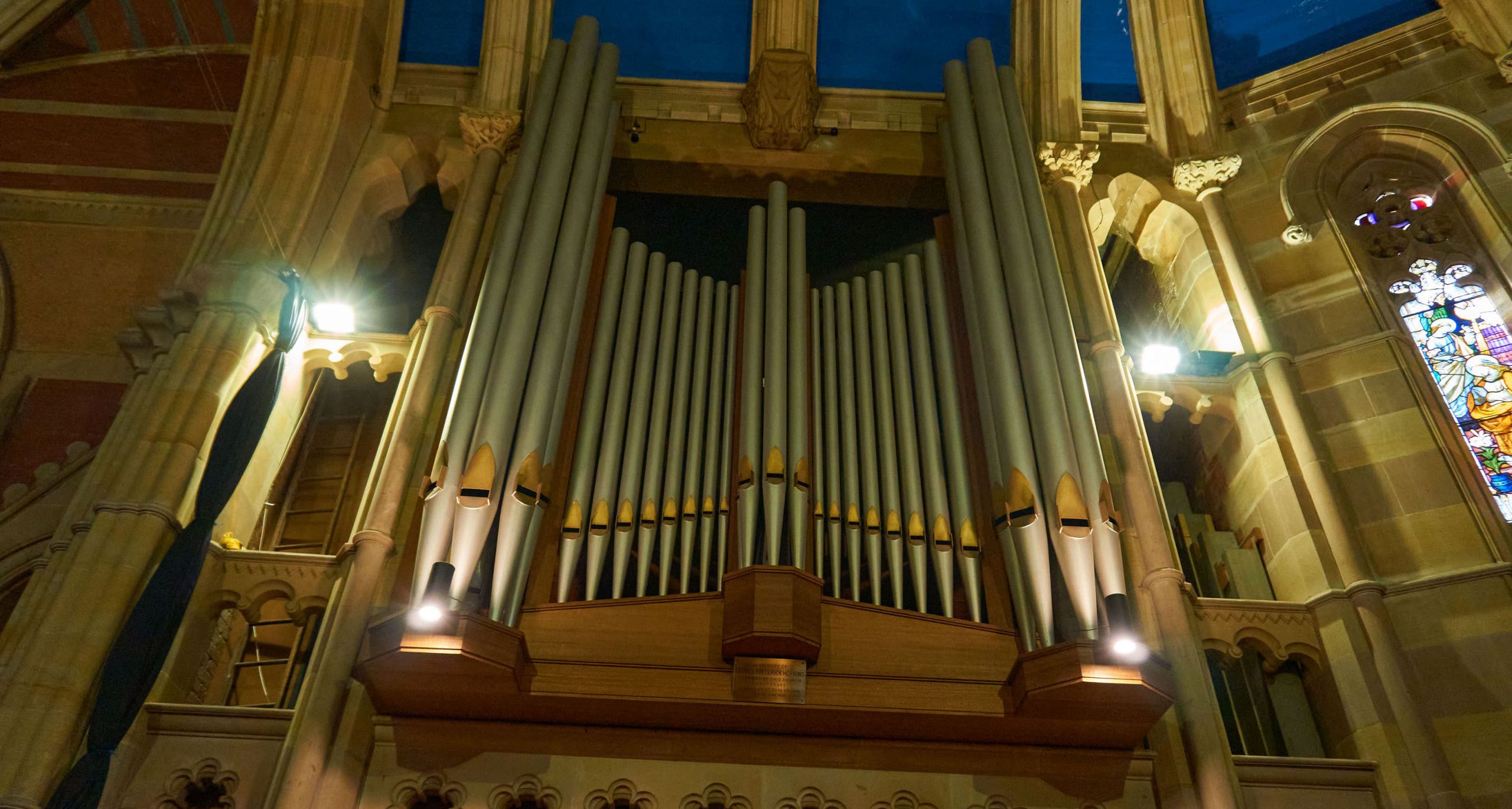 A Historic Account of the Organs of St John’s Church

St. John’s Church, Launceston, is fortunate in being one of the earliest churches in Australia to have a pipe organ and even more fortunate that the history of both the first and second instruments can be traced in detail from the time of their being built to the present day .The following account proves to be both interesting and informative.
“The present instrument offers a quality and range of sounds which make it one of the finest parish church organs in the Southern Hemisphere. As  a recital instrument, it has a versatility for the presentation of all schools of organ composition, especially those works written in the Romantic and post-Romantic tradition of the past one hundred years as well as for many modern compositions.  Helped by the acoustic reverberation of the building, the organ, whether heard with an individual stop drawn or in full chorus, soft or loud, smooth-toned or fiery, produces a sound which is always warm and always majestic.”
William Pierce, St John’s Church Organist, May 1983

The first organ was built in 1826 by John Gray of London at a cost of £300, with shipping costs. It arrived in Launceston in September 1827 and was installed before May 1828 by Mr Evans (of Evans & Gribble) and a Mr Beckford. It had 568 pipes and 8 stops (or registers) with a single keyboard and compass of 4 octaves. In the lowest octave, the note A flat was left out because of the system of tuning then in vogue which, we are told, made it impossible to play in any key exceeding 3 sharps or 3 flats. This organ was positioned on the former west gallery, where the choir assembled for services, on each side of the console. The earliest available details of appointing an organist have been found in a letter from the Reverend James Norman to the Colonial Secretary’s Office in May 1828 requesting payment of a salary to ‘one Cuncliffe, a clerk in the Police Force for his services as organist’. It is not recorded whether he was actually appointed.

Changes to the organ took place sometime later, probably in about 1850, when an enclosed chest was added, (perhaps by Gray and Davidson), carrying an 8 ft Treble Clarabella and a 4 ft Flute – full compass.
In 1862, the organ was sold to St Andrew’s Kirk, Launceston for £290, after which it was moved to St George’s Church, Invermay under loan from the Launceston Grammar School who purchased the instrument for £190 in 1922. The organ was then transferred to the Launceston Grammar School in 1933 when the Chapel was completed. Hill, Norman & Beard of Melbourne was commissioned to alter the bass compass from GGG to CC and to add a pedal board with a Bourdon 16 ft and a Bass Flute 8 ft. An electric blower was provided for the new section. In 1965, the organ was purchased by St John’s Church, Franklin in southern Tasmania for £750. Throughout this time, the organ had been moved around without its original front which has been retained at St John’s and is displayed high on the west wall of the nave.

‘The opening of the new organ recently erected in St John’s Church, took place on Sunday last, the event being celebrated by the performance of two full choral services. The Venerable Mr Reibey preached in the morning and the Reverend Dr. Browne, in the evening. Mr Thomas Sharp, organist of the church, presided at the instrument and was well supported by an efficient choir stationed on either side of the organ.’
‘Launceston Examiner’ Tuesday, 26th August, 1862

The organ was planned by St John’s Church organist, Mr Thomas Sharp, and was built in 1861 by Charles Brindley of Sheffield, England. It was installed in the old west gallery. Its price in England was about £350, but the freight, cost of installation and other necessary expenses brought the total cost to nearly £500.

The new instrument consisted of ‘Great’, ‘Swell’ and ‘Pedal’ organs; two rows of keys, and two and a half octaves of pedals. The compass of the Great organ is from CC to G in alt., the Swell from tenor C to G in alt. and the Pedals from CCC to F. The case was painted in imitation of oak, and the front pipes, now displayed in two panels on the west wall of the nave, were finished in blue and gold. The organ was powered by a hand-operated bellows.

We are told that at the time of construction, the pipes were not all new. One rank of flutes of rare tonal beauty are said to have been made by Renatius Harris of England in the early 1660s.

In 1912, after the 1901-1911 building extensions, Mr J. E. Dodd, an organ builder from Adelaide, was instructed to remove the organ to a large well-designed organ loft to the left of the chancel. The roof of this chamber is dome-shaped, and deflects the sound out into the building which has a reverberation period of about 3 seconds when empty. Mr Dodd also added two new stops, a Clarabella (clear toned flute) and a quiet string toned stop named Viol d’Orchestre.

The architect of this building, Mr Alexander North, seemed to have been one of the very few of his profession who demonstrated a sound awareness of the needs of organs and choirs.

In 1912, G. F. Hopkins arrived from England to become the organist and choirmaster at St John’s. He had been an organ builder with the firm of Hopkins & Rimbault, and the nephew of Dr E. J. Hopkins, organist of the Temple Church, London. In 1915, G. F. Hopkins began to rebuild and enlarge the Brindley organ on English cathedral lines. The project was not quite complete when he left Launceston in 1929. The organ, however, was a superb instrument incorporating all the old pipework, new slider sound boards, ranks of pipes imported from the best English sources and wooden pipes made from fine local timbers. In 1929, the organ consisted of 3 manuals, 2 connected, 31 stops and 1900 pipes. It is interesting to note that G. F. Hopkins had planned 4 manuals, 90 stops and 4,700 pipes.

The next stage in the development of the organ occurred in 1934 when George Fincham & Sons, organ builders of Melbourne, installed a front row of metal pipes and a new detached 3-manual console in the chancel. Only 2 manuals were connected to pipes at this stage. The tubular pneumatic action created problems as the console was about 40 ft below the instrument itself. There was a marked delay between the pressing of the keys and the sounding of the pipes, often embarrassingly. The pedals were even slower.

The situation remained unchanged until 1954 when a Claribel Flute, which is a pleasant solo stop, was added as a tribute to Mr Arthur Gee for his long and faithful service to the church as organist and choirmaster.In 1955, the state of the organ was assessed by Mr Keith Davis, who confirmed the extent of the deterioration which had taken place over time. During that year all the pipes were cleaned and urgent repairs made. The report concluded that a complete rebuild would be necessary within the next few years.Lindsay O’Neill, organist and choirmaster, was responsible for the comprehensive rebuild of the instrument by Messrs J. W. Walker & Sons Ltd. of England. The project was commissioned in February 1959 and was financed from generous bequests from the late Miss Ada Harrap, Mr Leslie Harold Lakin, Mrs Hilda May Lakin, and Mr Herman Rupp Lakin.

Early in 1960 many pipes were sent to England for revoicing. The work in the church began in August, with the arrival of Walker’s representative, Mr Arthur Jones, taking 6 months to complete the project. At this time of rebuilding, the opportunity was taken to install the extra pipes for the third keyboard and fit in a new blowing apparatus and replace the pneumatic action with a modern electronic action to overcome the delayed response. The new console is a wonderful piece of electronic craftsmanship and is also a beautifully carved piece of furniture.The music-desk and frame of the console are constructed of fumed oak, the stop panels are of polished ebony, and the key-cheeks are of French-polished mahogany. The keys, draw-knobs (which are fitted with toggle action) and thumb pistons are of solid ivory. The electro-pneumatic action is, of course, perfect. The electric swell shutter control gives the pleasant illusion of being mechanical in operation. The console, placed at the north side of the chancel steps, is well-located to hear the organ in proper perspective, and from here everything sounds in correct balance even when the Tuba, which speaks out into the north transept and Westminster Gallery, is employed.All the pipes were retained and nearly 600 new ones added, many of them for the third manual, and making up the ‘choir’ organ of quiet-toned stops. There were also two new solo stops, the Tuba and a Clarinet. The last was purchased with money from the Memorial Fund for the late Mr Harold Brownrigg, son of a distinguished former rector and a member of the choir for many years.

Laurie Pipe Organs of Melbourne made further alterations in 1974 when the Tuba was taken out and repositioned ‘en chamade’ (horizontal) above the choir vestry door, creating a most magnificent solo trumpet. A 32 ft Bombarde was also added to the pedal organ as an extension downwards of the 16 ft Trombone. These additions were made possible by the generous bequest of the late Mr Laurence Denham, and the gift of the Reverend David E. C. Lewis, a descendant of the first Chaplain, the Reverend John Youl, and an Assistant Curate of St John’s 1972- I 974.   The organ now had 3 manuals, 74 stops and 2,541 pipes, with 37 separate ranks of pipes.

The long-held goal to complete the original concept of the organ as designed by G. F. Hopkins but not added to in the 1960 rebuild was realised in 2007 when Simon Pierce of Pierce Pipe Organs in Brisbane, and son of former St John’s organist William Pierce, added a new IV rank Sharp Mixture to the Great in memory of Lindsay O’Neill, organist; a new Full Mixture to the Swell in memory of William Pierce, organist, and the Swell Mixture reconstituted as a Sesquialtera in memory of Archdeacon Leonard Sutton. This work completed the Swell and Great organ according to the Hopkins design. A total of 584 additional pipes were added to the Mixtures.

The dedication of the new stops took place on 2nd December 2007 with Gaylene Cohen, organist, demonstrating how the mixtures blend very nicely without being too sharp into the chorus and giving the whole organ a satisfying lift. In addition to the new Mixtures, a Laukhuff capture system was installed, as well as 75 drawer stops replaced with a modern Kimber Allen type.

The total cost amounted to $43,310, and was funded by generous donations from the O’Neill, Pierce and Sutton families, as well as the congregation, community, and the many friends of the St John’s organ.

The tubular bell system produces the same effect as a carillon of bells and is operated from a console housed in the north ambulatory of the church. Amplifier equipment is installed in the tower. The chimes can be heard over a distance of several kilometres; however the volume can be manually controlled.
The chimes were made by ‘Boosey and Hawkes Ltd, London, the amplifying apparatus supplied by Amalgamated Wireless of Australia and installed by Findlays Pty Ltd’. – Examiner, 25 October 1946
The chimes were donated by the congregation as a peace thanksgiving at a cost of £450 and were first heard on 17 November 1946 being operated by the organist, Mr Arthur Gee. The chimes have signalled the call to worship, and the joy of newly-weds for decades, and important announcements such as the birth of a baby to Princess Elizabeth. – National Library of Australia

In 1964, a harmonium was provided to the chapel from a bequest from the late Mary M. Gee. The harmonium is a single manual German built 15-stop, 2 pedal Hörügel.

SPECIFICATION OF THE ORGAN

This information has also been published in a pamphlet
available from the church office. Information last revised November 2015